JEJ reports that the JS Papyri were returned to the Church. 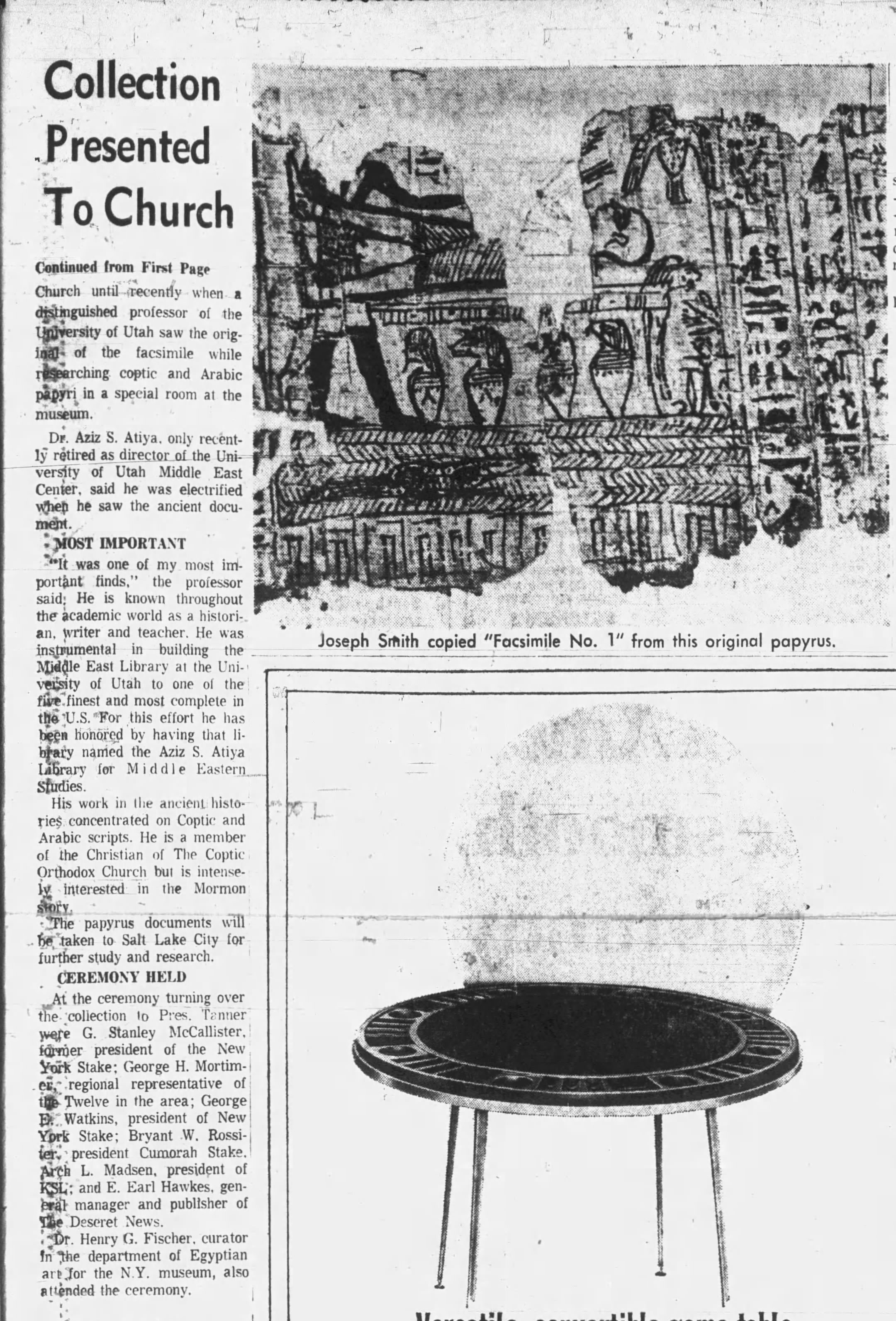 New York—A collection of pa[p]yrus manuscripts, long believed to have been destroyed in the Chicago fire of 1871, was presented to The Church of Jesus Christ of Latter-day Saints here Monday by the Metropolitan Museum of Art.

The long-lost manuscripts were presented to President N. Eldon Tanner of the First Presidency of the Church.

Making the presentation was Thomas P. F. Hoving, director of the museum.

"I know of the great interest this material has for your Church, and I am very happy that it can go home where it righdtfully belongs," he said.

Accompanying the manuscripts was a letter attesting to the fact that the papyri had been the property of the Prophet Joseph Smith, first president of the Church. The letter, dated May 26, 1846, was signed by Emma Smith Bidamon, widow of the Prophet, and his son.

Included in the papyri is a manuscript identified as the original document from which Joseph Smith had copied the drawing which he called "Facsimile No. 1" and published with the Book of Abraham.

An interpretation of the facsimile was prepared by Joseph Smith, and the Book of Abraham now forms part of the volume known as The Pearl of Great Price.

The Pearl of Great Price is accepted as one of four volumes of scripture by Church members. The others are the Bible, Book of Mormon, and Doctrine and Covenants.

Included in the museum's presentation are a number of other papyri once in the possession of the Prophet.

These include conventional hieroglyphic and hieratic Egyptian funerary tests. Such papyri, including passages from the well-known Book of the Dead, were commonly buried with Egyptian mummies.

The papyri originally came into Joseph Smith's possession in 1835, along with four Egyptian mummies purchased by some Church members in Kirtland, Ohio. After his death in 1844, the mummies and papyri were sold by his widow. At least two of the mummies were burned in the Chicago fire of 1871, and it had been assumed the documents were also destroyed at that time. The collection presented to the Church Monday is only a part of the papyri Joseph Smith had in his possession.

The museum has had the collection since 1947, but their existence was not known to the Church until recently when a distinguished professor of the University of Utah saw the original of the facsimile while researching coptic and Arabic papyri in a special room at the museum.

Dr. Aziz S. Atiya, only recently retired a director of the University of Utah Middle East Center, said he was electrified when he saw the ancient document.

"It was one of my most important finds," the professor said. He is known throughout the academic world as a historian, writer and teacher. He was instrumental in building the Middle East Library at the University of Utah to one of the five finest and most complete in the U.S. For this effort he has been honored by having that library named the Aziz S. Atiya Library for Middle Eastern Studies.

His work in the ancient histories concentrated on Coptic and Arabic scripts. He is a member of the Christian of The Coptic Orthodox Church but is intensely interested in the Mormon story.

The papyrus documents will be taken to Salt Lake City for further study and research.

Dr. Henry G. Fischer, curator in the department of Egyptian art for the N. Y. museum, also attended the ceremony.